This post describes the intended solution of the “Est Que Elle?” web challenge that was created by Tasos Tsimpoukis and released on the preliminary round of the 1st Deloitte Greece Student Hacking Challenge on March 2019. It was perceived as a relatively hard yet straightforward challenge, since the full source code was provided to the players. According to its description, the challenge concerns the exploitation of an SQL Injection vulnerability.

After starting our session on Hackazon platform https://portal.hackazon.org, which was used to host the CTF, the link to the challenge is shown.

When visiting the link of the challenge, the PHP source code is printed on the page. We proceed with copying it to a text editor: 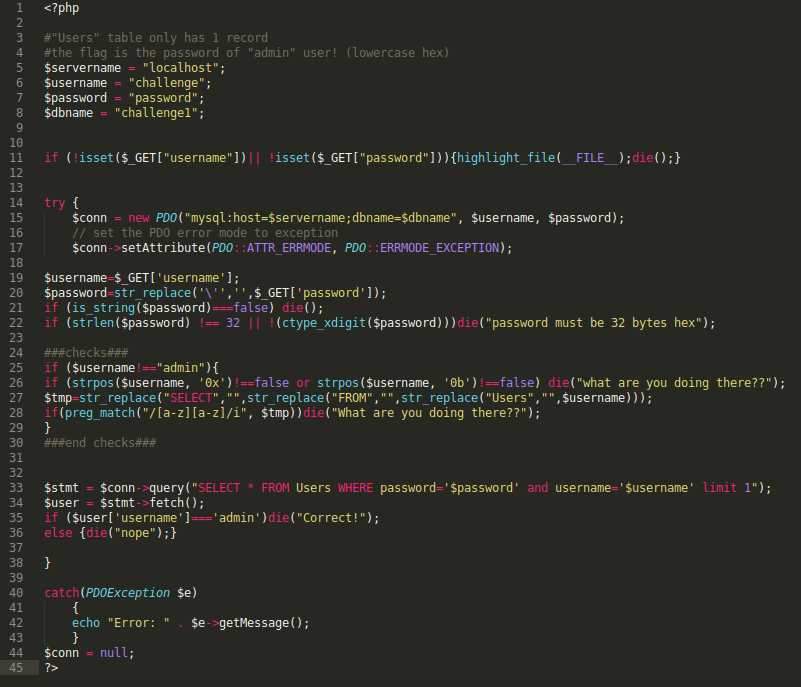 The source code can be downloaded here

We can now start analyzing the PHP source code, in order to search for the vulnerability and any limitations that might occur during exploitation:

It is now known that:

Understating the limitations and achieving a basic comparison

With this knowledge, we can start testing the web application. The first action is to verify the existence of the injection using a single quote on the “username” field:

That’s a great start. As a next step, we have to force the web server to return “nope” for one query, and “Correct!” for another. A payload such as ’or 1=1 -- - should return “Correct!”, but it cannot be used since it contains two consecutive letters. So instead of “or”, the “||” operator will be used, which is a synonym for “or” in MySQL [3].

In case of Boolean SQL Injection, attackers compare the table data against data controlled by them and force the web application to return different responses, depending on whether the attacker controlled data match the data on the database. In our case, we want to extract the “password” column of the “Users” table. Unfortunately, we cannot refer to the “password” column directly, as the string “password” does not pass the checks of lines 27 and 28. Another option could be to select the related column using its index number; however this is not possible in MySQL [4] [5]. The only way to refer to the “password” field is indirectly, by using an asterisk to select all columns of the “Users” table. Another obstacle is that Boolean SQL Injection attacks use a function such as “substr()” in order to extract the data character by character. The “substr()” function, as well as the majority of MySQL functions will not pass the checks of lines 27 and 28 [6].

Figure 6 - Comparing the only row of the Users table against itself returns the "Correct!" message

In MySQL, a SELECT statement can be used to select a row consisting of literals.

We now have a way to compare data from the database, against data controlled by us.

Figure 8 - The right operand of the equality is controlled by us:

Please note that the errors printed by the application can be used in order to determine the number of columns for the “Users” table.

Figure 9 - An error informs us about the number of columns in the "Users" table:

At this point, we are able to compare the value of the only row of the “Users” table against a row of our choice. However, two problems persist:

The second problem is easy to solve in a number of ways. One of them is string concatenation, which is performed using spaces in MySQL.

Figure 11 - We can create strings of length greater than one:

The first problem is more difficult and needs some experimentation with the MySQL database to be solved. Even though not documented in the “comparison operators” or the “string comparison functions” pages of MySQL documentation [7] [8], MySQL can compare strings using the less-than and greater-than operators. 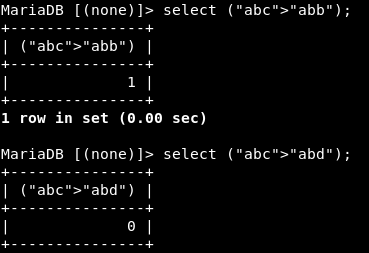 On top of that, columns can also be compared with the aforementioned operators.

Figure 14 - If the first two columns are equal, the result depends on the comparison of the second columns: 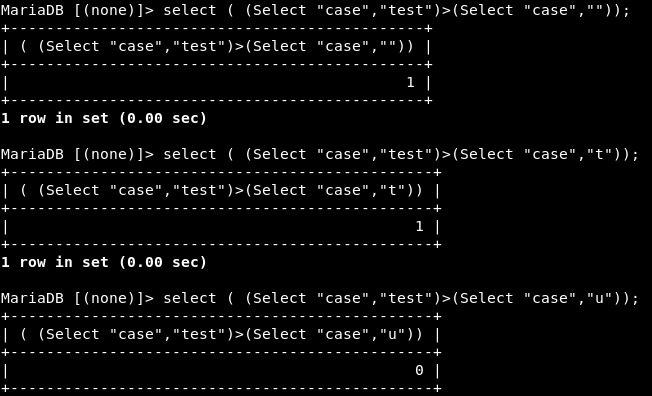 This is certainly something that could be of use in this case. We proceed into manual testing against the target application in order to verify that it is possible to retrieve database content with the aforementioned method. We do know that the username is “admin”, so we try to guess it:

Bingo! Now we can write a script that will automatically try to guess the characters of the “password” column and return us the flag:

Figure 16 - The python script has successfully guessed the correct password:

Obtaining experience with solving CTF challenges such as the one described above can provide useful skills to a professional penetration tester, especially when dealing with Web Application Firewalls (WAFs). Many WAFs will block widely known payloads but a non-widely known payload such as this might be able to bypass a number of those. At the time of writing this post, the payload used for this challenge is not used by popular automated SQL injection tools such as sqlmap (although some variations are included therein) [9] and is not listed in any of the well-known cheat sheets such as PayloadsAllTheThings or OWASP. This makes it more likely to remain undetected by a number of commercial Web Application Firewalls.

Disclaimer: The authors of this article are not responsible for any misuse of the information. This information shall only be used to expand knowledge and not for causing malicious or damaging attacks. You may try all of these techniques on your own computer at your own risk. Performing any hacking attempts / tests without written permission from the owner of the computer system is illegal.

In March and April 2019, Deloitte Greece organized the 1st Greek Student Hacking Challenge, with a challenge namely “Can you hack your way to Vegas?”.